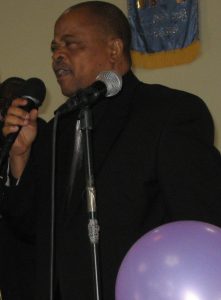 Rev. Dr. Andrew Igene’s encounter with the Lord was in August 1970, when he was born again at a christian camp-meeting in Benin City, Nigeria. He graduated Top of the Class (Bachelor’s) from The University of Ife in 1976; and Master’s (Political Science) from The University of Ibadan in 1980; both in Nigeria. He was a TV news reporter and editor (Nigerian Television Authority, Benin City), Newspaper editorial board Chairman(The Observer Group) also in Benin. He was elected to two consecutive terms as Chairman, Nigeria Union of Journalists (NUJ), Bendel & later Edo States. His Journalistic career spanned over 13 years (1979-1993)

In his walk with the Lord over the years, he has learnt valuable lessons in faith and spiritual warfare. His teaching ministry brings the Bible alive…exalting our Lord Jesus as King! The Lord has commissioned His servant to go…the hour is late! Has ministered  in churches, camp-meetings, conventions and evangelistic campaigns. Let’s lift Him up together and worship Him(JESUS)…AMEN!